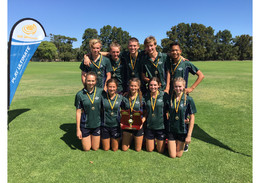 Yesterday 10 Year 11 students went to the WA Ultimate Frisbee Carnival held in Wilson. Shenton have 2 National Ultimate Frisbee representatives, Reyer and Shannon Carpenter. Their leadership throughout they day was exceptional, as was their talent. It was Shenton’s first time playing at the carnival, and our slight inexperience placed us fifth out of 8 teams.

Ultimate is a self refereed game, with each team giving opposition teams a ‘spirit of the game’ rating for every game.

Shenton won the highly esteemed SPIRIT award, which was indicative of the students’ excellent sportsmanship and enthusiasm throughout the day.

On a fantastic day for cricket the Shenton senior cricket team won the Geoff Marsh T20 regional carnival today. The games were played in a modified Super 8 format.

The boys played 4 qualifying games and were victorious against two teams from Wanneroo, John Forrest and Ballajura by huge margins to qualify for the grand final. All players contributed in every aspect and played a very high level of cricket.

Taking on Cricket specialist school John Forrest, who won the recently concluded Kim Hughes senior boys competition, the lads were keen to put on a good show. Winning the toss and bowling they quickly had the favorites under the pump picking up wickets regularly through some excellent fielding and textbook bowling to restrict them to 80. As usual Captain Puj (iceman) Bajaria stepped up and quickly had the team on the path to victory with a fluent 38. After that it was about consolidating and the boys that followed played their roles to perfection to enable some big hitting by Evan Robson and Jean Pierre Chedid late to finish with 156.

The boys below are to be congratulated as they have waited and worked hard for this reward.

It was another hot day out at Belmont Park Tennis Club but as usual the girls did not complain. They relished the opportunity to re-ignite their rivalry with tennis school Applecross and Perth Modern. With three teams and with the mix of grass and hard courts we were quietly confident that we could have a successful day. The games were highly competitive and the girls battled away to finish 3rd, 3rd and 5th in their rounds respectively.

The girls below are to be congratulated:

Well swimming season has finished again and the Shenton swimmers were amazing as usual. We finished 2nd !! 39 points behind first place (out of a nearly 1200 point total) a very close result.
(3rd place was over 400 points behind.)

As a result we were awarded the Meritorious school award for the second year running.

Champions on the day were:

© 2020 Shenton College
Designed and built by Media on Mars